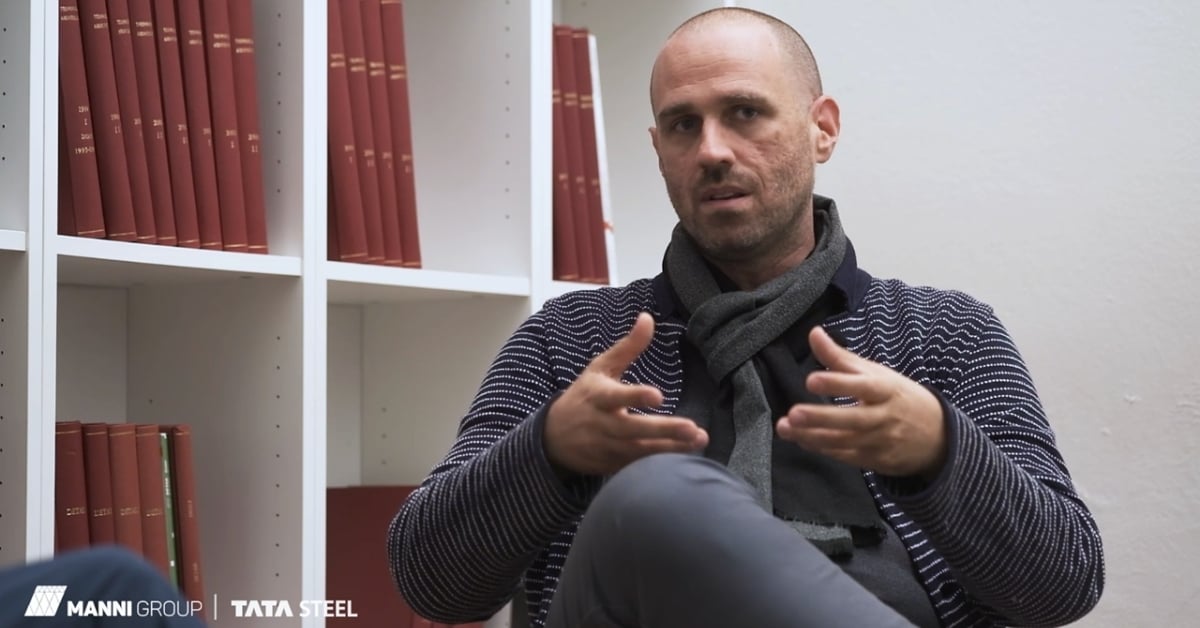 The cycle of interviews by Manni Group on the occasion of the new edition of YACademy continues with another illustrious name of the world of architecture, the firm BIG, with Giulio Rigoni.

Giulio Rigoni is Senior Project Architect at BIG, the famous international architecture firm with headquarters in Copenhagen, Denmark, which, since 2010, also has branches in New York, London and Barcelona.

BIG was founded by Bjarke Ingels; the firm counts over 400 employees and, in 2015, was recognised as one of the most famous architecture firms in the world, not just for its excellent work in the sector but also for its size.

BIG is made up of a group of architects, designers, town planners, landscape professionals, interior and product designers, researchers and inventors who are truly passionately in love with their work.

The firm uses its incredible architectural productivity to promote a concept of innovation and modernity, with strong links to the desire to express, also through architecture, the continuous evolution of modern life.

The designs of BIG pursue the goal of complementing their architectural soul with the influence of technology which has a significant and undisputed effect on how city dwellers experience their spaces.

The strong instinct to bring to life architectural designs that are very far removed from the inanimate and formal buildings that are typical of traditional architecture is increasingly paving the way for an architectural modernity, where the context is the location par excellence for leisure, work and living.

What makes the work of BIG so cutting edge?

The firm’s work has at its heart the desire to create architecture that can express the changes our planet is going through, under the ever-growing influence of technological contemporaneity.

Where Bjarke, the founder of BIG, is concerned, architecture must be interested in innovation as much as art and science are, due to the role it plays in our cities. Everyone’s lifestyle habits have changed and evolved; according to the firm’s philosophy, these habits cannot be put aside but must become the nexus of architectural projects.

The work logic of BIG is Step by step; as Giulio Rigoni also explains during his interview with Manni Group: a problem can always be the breeding ground for opportunity. All we need to do is concentrate on the solution and let creativity play its part.

From its early days, BIG has won several national and international prizes, making it one of the most appreciated architecture firms in the sector.

The firm owes its prestigious reputation to works like:
Here are some other projects created by BIG, known for their iconic uniqueness:

These are just a few of the firm’s architectural works. If you visit the Projects section of the BIG website you’ll be able to discover all the other equally famous projects.

Manni Group: BIG has created many different projects; however, one of the elements that recur most often is a composition methodology that entails the replication of the same building element or module (San Pellegrino is an example of this). How does the industrialisation of building elements support this methodology?

Let’s start by saying that the concept of “repetition” in industrialisation is not the starting point for the composition.

I think that composition by juxtaposition, by repetition of the unit’s elements is a quasi primordial concept in the world of architecture.

Repetition makes it possible to obtain all types of space and architectural effect. However, industrialisation is an option in some projects more than in others.

In ancient times, the repetition of elements was a consolidated practice; it still is. Having this production option is almost inherent in this system.

In contexts like that of San Pellegrino, the implementation of repetition is more complex, as we handled the creation of the project like an haute couture design. In other architectural situations, such as Urban Rigger in Copenhagen, the entire project is built by following the concept of element repetition in various ways.

Manni Group: One of the elements that has led people to fall in love with architecture as practised by BIG is the ability to transform the roofs of the buildings in true urban green trails. What’s your favourite project in this sense and what opportunities do you see for the use of green roofs, in general?

Among more recent projects, Brooklyn Bridge Park is, without any doubt, very representative of how we do things at BIG.

The advantages and the urban planning of the roof are rather obvious. In that case, simply moving traffic and transforming this infrastructure, where to build the park, is a very simple solution that requires just one step and whose advantages are immediately clear.

Green roofs are one of the complementary solutions that BIG has always tried to suggest. Another project springs to mind as absolutely relevant: the Amager Resource Center in Copenhagen, the large waste-to-energy plant that was transformed into a ski piste and a climbing wall.

In this case, we installed a synthetic grass green roof, which is not really an example of the application of a true green roof to the building. It is, however, a solution that symbolises the way BIG works and its philosophy, namely the extent to which we’re able to transform a problem - such as the presence of the waste-to-energy system, in this case - into an incredibly attractive advantage for the urban context.

Manni Group: BIG has certainly revolutionised architecture’s narration methods: all projects are told as a series of perfectly intuitive consequential actions; in this sense and in your opinion, is the technology of construction part of architectural thought (thus affecting aspects of composition) or rather the means for bringing the design to life?

In my opinion, narration and composition are perfectly linked only if the design is equally clear. The more precise and strong a design is, the simpler the narration becomes. It requires a means of representation, such as graphics, which are very important for our firm.

Manni Group: What would you suggest young architects do?

A very important message is that all problems are solvable. When it comes to working as a firm, where every problem can become an opportunity, the thought that you must never let anything stand in your way is very important. All situations can be changed into something positive.

Daring, trying and testing are all parts of a single message that I would like to send to those who are approaching the world of employment. I would also tell them to be ready to work hard, because hard work lies at the heart of everything.