A new addition has been made to the classic skyline of this U.S. metropolis by Joanna Cieslikowska, Sylwia Darewicz, Aleksandra Wtulich and Weronika Majchrowicz: their circular economy project came third in the international contest for the Detroit Waterfront District.

The steel and glass skyscraper is Detroit’s picture-postcard landmark: the Polish SOWA team drew inspiration from this iconic building to redesign Detroit’s leisure and business centre overlooking the river of the same name.

The three towers of Detroit 3.0 bring a major innovation as a strong focus has been placed on energy efficiency and the sustainable lifecycle of materials. The project by Joanna Cieslikowska, Sylwia Darewicz, Aleksandra Wtulich and Weronika Majchrowicz came third and won a €2,000 prize at the Manni Group Design Award contest.

The second edition of the international contest was promoted by Manni Group in collaboration with YAC – Young Architects Competition and Sterling Group.

A new sustainable era for Detroit

We are on the site of the former Joe Luis Arena, along the riverfront. Between the 19th and 20th centuries, Detroit 1.0 evolved into an automobile city, but later experienced a severe decline. The construction of the Renaissance Center in the 1970s marked the start of a new chapter for the city, namely Detroit 2.0.

With Detroit 3.0, another era of urban development began. The design includes a mixed-use complex that is characteristic of this central location in the city, which is in the process of being redeveloped, combining hotels, residential buildings and offices that bring residents and visitors together to enjoy a spectacular view of the Canadian shore.

The project adapts to the urban grid, opening up towards the Detroit River and creating connections with the city through the layout of greenery “coats” that descend into the city from the three skyscrapers, connecting with the urban fabric. These green lawns spread out through the concrete jungle of the district and cover the adjacent car park and the roof of the TCF Center, creating a lively and healthy oasis where water has become an integral part of the project.

On the ground floor, the architectural complex features a portico with wooden details, a reinterpretation of Detroit’s magnificent Art Deco style. Above the two-storey high base, which houses leisure facilities, stand the three towers with hotels, residential spaces and offices. 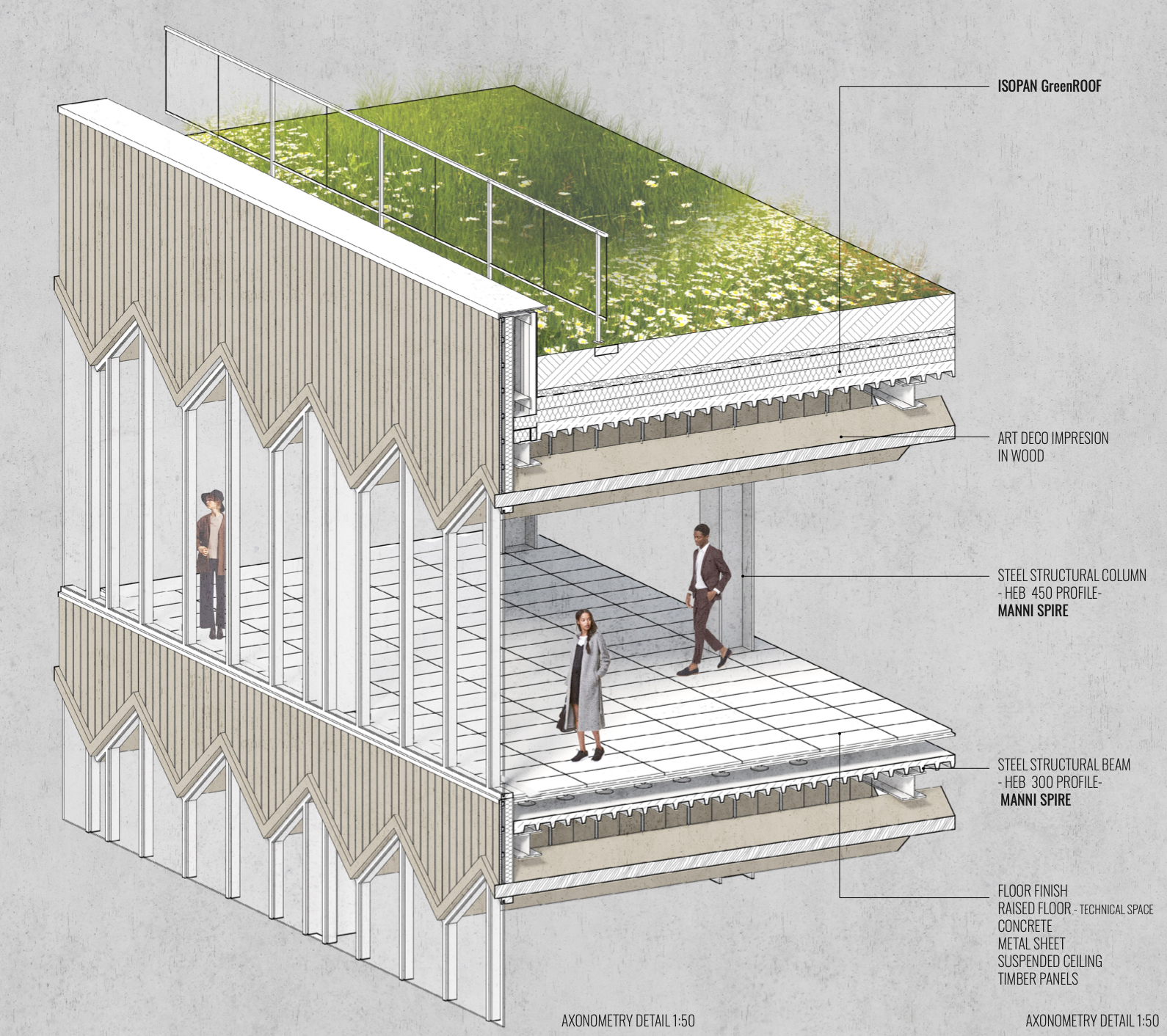 The innovation of Detroit 3.0 is a focus on circular economy. The load-bearing structure uses Manni Sipre steelwork, while naturally ventilated façades minimise energy consumption. The use of recycled water for the heating and cooling system of the buildings also plays a key role: water is stored in an underground aquifer and is pumped up to the technical rooms and then distributed to all the floors.

On the outside, a Manni Green Tech lightweight steel grid frame covers the façades, allowing climbing plants to flourish on every level: the vertical greenery, combined with Isopan GreenROOF insulation on the roofs, cools the incoming air and gives the façade plenty of shade, thus ensuring the ideal temperature inside the buildings.

Detroit was the capital of the automobile industry between the 19th and 20th centuries and then evolved in the 70s thanks to urban development. Today, the skyscrapers of Detroit 3.0 pave the way for a new era of urban regeneration.